Atlantic herring, Clupea harengus, is an important commercial species in Irish waters (Molloy, 2006). The species is also ecologically important as it occupies a central position in the pelagic marine food-web. Spawning takes place in coastal waters, mostly between September and February in high energy environments, and usually at the mouths of bays and estuaries. Herring are benthic spawners and require specific substrates on which to lay their eggs, primarily gravel, stones, broken mussel shell and/or flat rock (Breslin 1998). They often form dense spawning aggregations so high mortality can be exerted with little fishing effort. Spawning grounds are also vulnerable to disturbance from deposits of dredge spoil and construction of structures on or over the seabed. Given this susceptibility to anthropogenic activities, mapping of spawning grounds is important, as is ensures that such information is in the public domain and available for decision-making in the context of marine spatial planning and fisheries management. 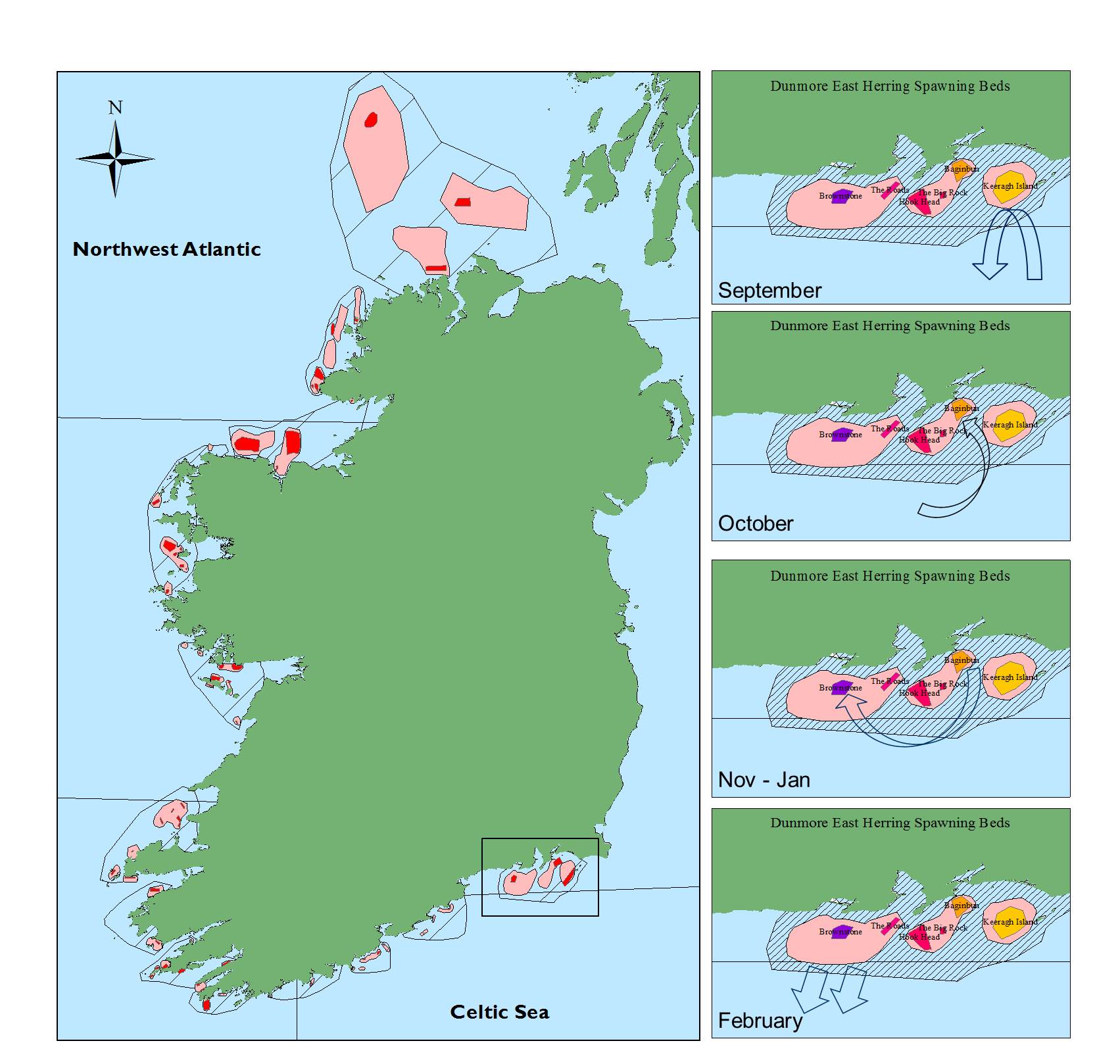 The location of herring spawning beds (red), grounds (pink) and areas (hatched) identified in this study, allowing spatial and temporal analysis of spawning herring patterns. In the right-hand column, the seasonal movement of herring off the coast of Dunmore East, a commercially important area, is readily visualised and indicated by the arrows

The INFOMAR programme has produced a series of substrate maps which classify seabed sediments using the amplitudes and statistical properties of backscatter images. This dataset is produced using multibeam echosounders (MBES) which use sonar technology to transmit an acoustic pulse from the vessel to the seabed. This provides information on the bathymetry and the nature of the seabed which can then be used to interpret the substrate type present. Physical sampling undertaken by the project was used to verify the substrate maps produced. Sediment samples were subject to particle size analysis, to determine sediment grain sizes and the resulting map was classed into 8 physical habitat classes; rock, coarse sediment, mixed sediment, sand, muddy sand, sandy mud, mud and seaweed-dominated sediment. The rock class in this classification system encompassed small stones, pebbles, boulders and bedrock.

To identify herring spawning beds in Irish coastal waters, the seabed classification data was consulted and potential habitats identified. This was compared with data from larval surveys undertaken by the Marine Institute and with a comprehensive fishing industry survey conducted specifically for the study. Finally, a detailed inventory of individual herring spawning beds, grounds and areas around the Irish coast was produced.

The maps confirmed that all spawning beds reported by fishermen were composed of gravel/broken rock substrates except one small sandy area in Baltimore harbour. The beds ranged in depth from 7m to approximately 90m but are generally found in deeper waters – up to 80m - and located further off-shore on the north coast. In the Celtic Sea, by contrast, the average spawning bed depth was at ~30m depth, found no more than 3km from the coast and often located within bays and estuaries (see figure above).

A key finding was that spawning grounds occupy only a fraction of the potential habitats available, especially in the northwest. The reasons why are unclear but there are probably additional habitat factors used by herring other than substrate and which are not captured by the acoustic backscatter data.

The maps produced by this study are based on the extensive knowledge of the fishing industry and are validated by seabed substrate data from the INFOMAR. They are essential for the purpose of marine spatial planning and to avoid negative impacts on herring spawning grounds, in particular. The importance of herring as a forage fish, and as a commercial resource relies on favourable recruitment so the loss of spawning beds should to be avoided which, taking the precautionary approach, means that all known beds should be afforded maximum protection.