Different habitats support different communities of animals. Numerous factors play a part but two of the most important are water depth and seabed type (Naylor, 2003). Multibeam echosounders use acoustic technology to provide high resolution information on bathymetry and backscatter (seabed hardness) which can be used to accurately delineate different physical habitats.Although the term habitat mapping is relatively new, scientists have documented coastal and marine flora and fauna for centuries. These surveys have evolved from early studies which recorded species collected by nets, trawls and dredges, through in situ sampling of the undersea world by diving, and onto today, where technology makes it possible to view live footage of the seabed from the comfort of a research vessel. Despite all of these advancements in habitat surveying, there is still a lack of detailed marine habitat maps for Irish coastal waters.

In response INFOMAR has developed a methodology to create habitat maps using multibeam echosounder backscatter and bathymetry combined with sediment samples and video footage of the seabed. A survey of the Kenmare River, Co. Kerry was conducted by INFOMAR aboard the R.V. Celtic Voyager in August 2011 using a multi-beam echo-sounder. The survey was part of a wider EU habitat mapping project called MESH (Mapping European Seabed Habitats) Atlantic, the aim of which was to produce a standardised, broad scale, habitat map for the Northeast Atlantic.

The Kenmare River is a long, narrow, south-west facing bay located on the southwest coast of Ireland. Red sandstone forms reefs throughout the length of the bay which is designated as a Special Area of Conservation (SAC), containing three marine habitats listed on Annex I of the EU Habitats Directive, namely reefs, large shallow bays and caves. There is also a high number of rare and notable marine species present, for example it is the only known area where the northern sea fan, Swiftia pallida and the southern sea fan Eunicella verrucosa co-occur (NPWS, 2003). Using the multibeam imagery, areas with a similar backscatter response were delineated. Sediment samples taken within these areas are used to identify or “ground-truth” the acoustic classes into substrate classes. Biological samples provide an inventory of species present and are used to create detailed habitat classes. Video footage is used to document the species occurring on the reefs. The resulting habitat map (below) shows ten marine habitats reflecting the diverse array of species living on the reefs and in the soft sediments present in the subtidal section of the bay. It can be used to aid in the sustainable management of the bay and to monitor any changes in species distribution and habitat extent over time. 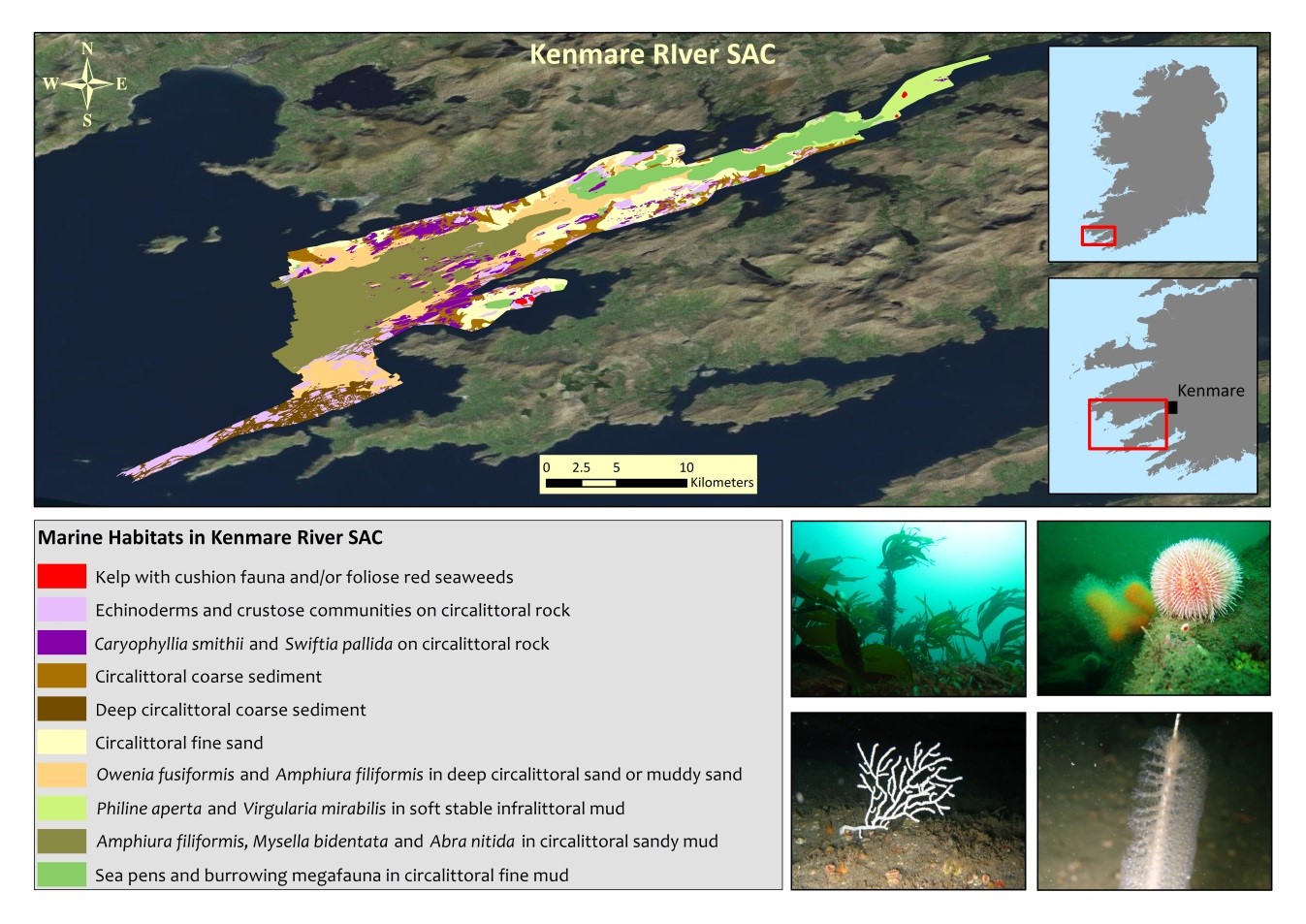 Soft sediments allow animals to burrow into the substrate where sometimes they remain hidden. While the habitat can appear desolate in comparison to the reefs, burrowing megafauna in addition to epifaunal species of sea pens and brittlestars can dominate the soft sediments. The deeper muds support clam species (Abra nitida) whereas muddy habitats at the shallower end of the bay support communities with sea pens (Virgularia mirabilis) and prawns (Nephrops norvegicus).

Rocky seabed supports a more colourful array of species including kelp, red seaweeds, sponges, urchins and anemones which attach to the sandstone reef. The characteristic shifts that occur in community composition with depth are evident; kelp and red seaweeds dominate the surface waters where there is more light, filter feeding species such as sea-fans prefer the deeper, darker waters where they rely on current-driven nutrients for sustenance.
The Kenmare River is one of a number of marine protected areas around our coast. The availability of detailed habitat maps greatly facilitates our ability to protect, conserve and manage these areas sustainably. Multibeam echosounder surveys have to date provided continuous coverage of twenty-six bays around our coast, many of which are designated SACs. These data combined with groundtruthing data have the potential to deliver standardised and detailed habitat maps for the entire coastal area.