The coasts of Ireland support a range of marine tourism and leisure past-times valued at € 841 million annually to the ‘Blue Economy’ (Vega et al. 2010). Scuba-divers and snorkellers are amongst the more numerous water enthusiasts and stand to benefit hugely from the production of accurate bathymetric charts and seabed imaging. Scuba-diving is already a very popular past-time along the coastline where different habitats, sea-scapes and shipwrecks can be explored in clear, diverse waters. An active diving community already exists with 66 clubs, governed by Comhairle Fo-Thuinn (CFT) or the Irish Underwater Council. In addition, recent tourism initiatives including the Wild Atlantic Way aim to attract international visitors and marine leisure enthusiasts to the coast to share in our unique marine ecosystem. However, it is necessary to provide suitable technological infrastructure to adequately support the industry especially in more remote coastal locations.
Despite the large number of divers and clubs in the country it can remain difficult to safely plan a dive or explore underwater terrain in new areas. With many potential hazards associated with scuba-diving a centralised, accessible on-line data-base describing various dive-sites, their depth and topography together with any other relevant information would be advantageous and contribute towards a safer sport and generate interest amongst visitors abroad. The remit of the Value-Added sub-program, to deliver a range of opportunities linked to user demands and commercial markets also attempts to translate technical hydrographic data into user-friendly formats. There was a need to deliver readily available seabed data for use in mobile devices and tablets in conjunction with CFT, the general diving community and targeting coastal areas including the Wild Atlantic Way. Following consultations with Dublin Business Innovation Centre it was agreed to proceed with the production of a web-based application specifically designed for the diving community and featuring INFOMAR seabed data. The software development team at Compass Informatics were invited to research its development.
Recognising that the largest repository of information in Ireland relating to dive-sites around the coast lies within the diving community itself, INFOMAR conducted a detailed survey of CFT members to identify key functions considered necessary for inclusion in an application built specifically for diving and also to recommend relevant and interesting dive-sites. Individuals were invited to provide detailed site descriptions including precise co-ordinates, access points, safety considerations, tidal information and brief biological descriptions of the flora and fauna present. In addition, accessible snorkel routes already featured along the Blue Way (five safe swimming/kayaking sites along the Wild Atlantic Way on Irelands west coast) were included. This information was supplemented with INFOMAR oceanographic data gathered by the Marine Institute of Ireland including Shaded Relief, Ocean Depth, Wave Height, Surface Temperature and Surface Salinity to allow the user to build a comprehensive picture of each dive site in Ireland at the touch of a bottom.
In conjunction with the oceanographic data the extensive INFOMAR shipwreck database was made accessible within the application to fire the imagination of all diving enthusiasts. The search and exploration of shipwrecks defines a diving career which is often measured by the number of wrecks visited, how often and how deep. The database provides the co-ordinates for each vessels final resting place and the opportunity to find them but also tells the story behind each shipwreck in pictures, bringing them to life and is a truly fascinating guide to Ireland’s marine heritage and maritime past. 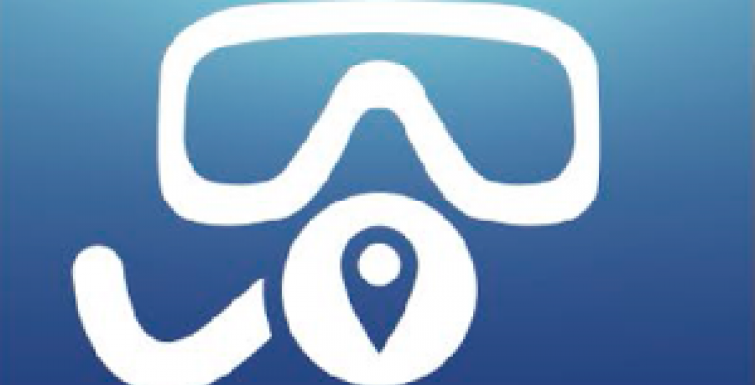 The CFT INFOMAR Dive App, produced in association with software development company Compass Informatics, is the first of its kind to specifically describe Irish waters and underpinned by accurate seabed data and is now widely available as a free download on both android and the Apple Store. It is an exciting guide to dive spots around Ireland overlain with high resolution bathymetric data allowing users to discover or pinpoint underwater features of interest and study or plan the dive in advance and in safety. Upcoming functionality will include the ability to record, log and visualise dives in 3d and upload photographs and video. The CFT INFOMAR Dive App was officially launched at the Dive Ireland hosted by Lough Derg Sub Aqua Club in Nenagh in 2015.