INFOMAR and the RV Celtic Voyager

The R.V. Celtic Voyager is due to retire on the 12th July 2022 as Irelands first purpose-built marine research vessel. Following 25 years of service, in which the vessel has played a key role in supporting Ireland’s fisheries research, coastal seabed mapping activities and national capacity build, it will be decommissioned in Howth. The last survey was sea-floor mapping in the Celtic Sea with INFOMAR and we are proud of our achievements working with the many excellent, crew over the years. The R.V. Celtic Voyager has facilitated the collection of fisheries, geophysical, oceanographic and environmental data since 1997. It replaced the 21 metre R.V. Lough Beltra, which had originally been a fishing trawler. Upgrading to a 31 metre research vessel was the beginning of a new era in marine science in Ireland, as the Marine Institute was able to provide a purpose built platform that could operate further offshore in Ireland's ocean territory supporting sustainable development of the island’s vast marine resource. 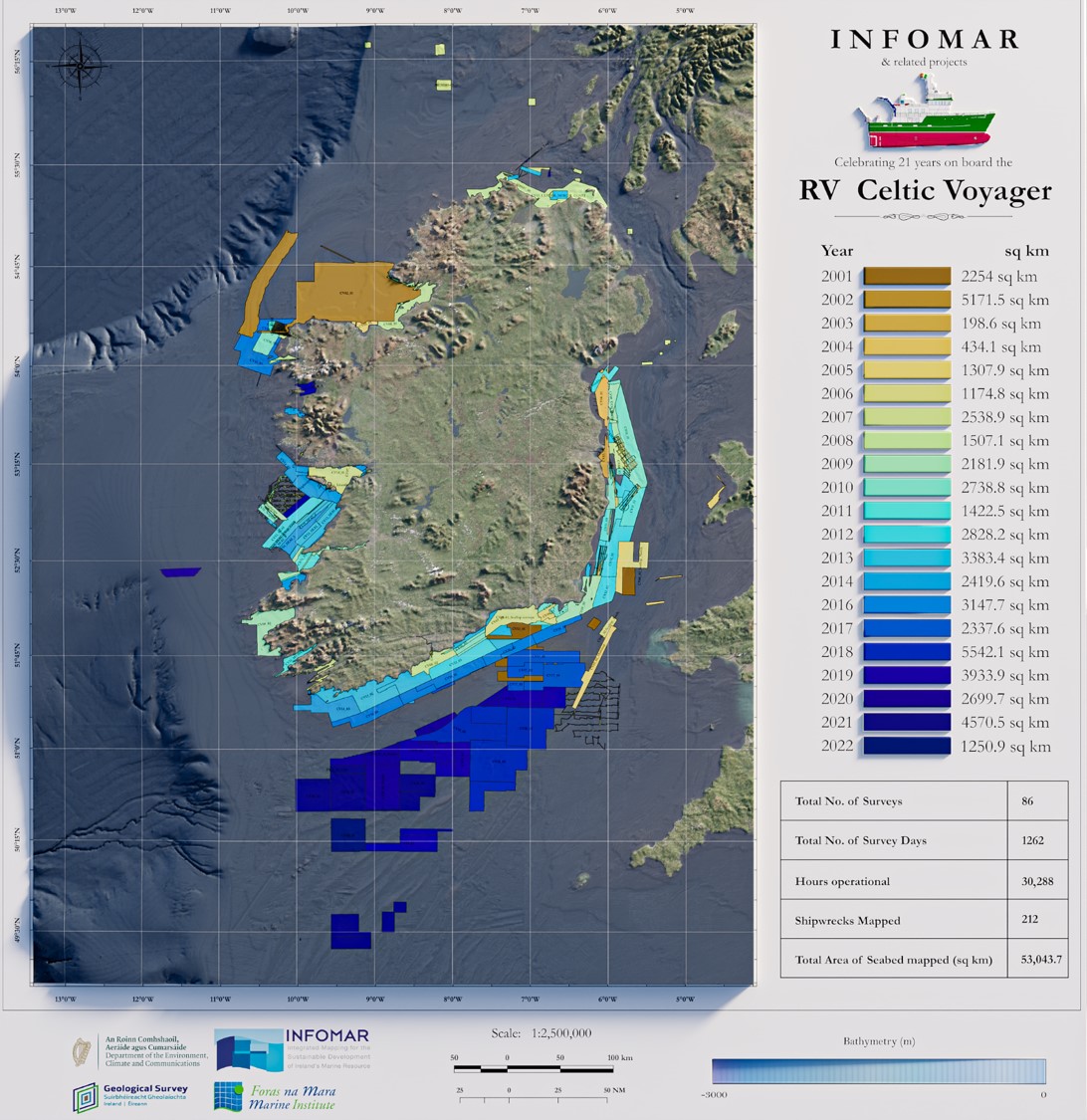 The research vessel has played an essential role in developing key fisheries research including the annual Underwater TV surveys of prawn fishing grounds. Using a towed sled-mounted camera system, scientists are able to estimate the population of commercial prawns based on the number of burrows visible on the seabed. Oceanographic data have also been collected by Water Framework Directive surveys aboard the Voyager since 2002 and have helped develop monitoring tools for benthos and phytoplankton. In 2012, this survey became the multidisciplinary Winter Environmental Survey established to collect information on physical conditions, water chemistry, and benthic macroinvertebrates. These data contribute to national and international monitoring requirements and inform national policy.

As the appreciation for the importance of seabed mapping grew in Ireland during the 1990’s for UNCLOS Convention related marine territory definition, a number of offshore surveys were undertaken by the Petroleum Affairs Division on behalf of the Government of Ireland. The findings reinforced the need for a comprehensive mapping of the entire Irish seabed which led to the Irish National Seabed Survey 1999 - 2005 (INSS) managed by the Geological Survey Ireland, and supported by Marine Institute. It was to assist this initiative that multibeam sonar was first installed on the R.V. Celtic Voyager, and following a successful seabed mapping trial in Galway Bay in 2001, the first official seabed survey conducted by the vessel involved the extensive mapping of Donegal Bay in 2002. Since then she has been a core piece of infrastructure supporting INFOMAR, Ireland’s successor seabed mapping programme, funded by Department of Environment, Climate and Communications, and jointly managed by Geological Survey Ireland and Marine Institute. INFOMAR commenced in 2006 with the aim of surveying the remaining shelf and coastal waters and to deliver a comprehensive baseline bathymetry data set to underpin the future management of Ireland’s marine resource. Much of the coastal survey work was facilitated by the Celtic Voyager, and her iconic green and white livery became a recognisable sight in her home port of Galway, as well as in Cork Harbour, Dublin Port, Howth and Killybegs.

Since the first seabed mapping survey of Donegal Bay in 2002 the vessel has completed 86 hydrographic surveys, each one over 21 years of operational service, contributing to a comprehensive bathymetric chart of Irelands offshore and coastal waters and a greater understanding of our marine environment. Its statistics for hydrography are impressive: having spent 1243 days surveying the seabed and completing over 300, 000 km of survey lines while doing so. In total, the vessel has mapped over 50, 000 sq. km of Irelands seabed including surveying over 200 of the 440 shipwrecks in the INFOMAR database.

As an island nation, the number of shipwrecks in Irish waters is high, nearly 14, 000 according to the Shipwreck Inventory of Ireland compiled by the Underwater Archaeology Unit (UAU). INFOMAR, in co-operation with UAU, maintains a separate, more detailed geodatabase for over 400 wrecks it has surveyed to date. The database comprises a comprehensive description of location, wreck condition, extent, dimensions and water depth. Over 200 of these have been surveyed from the Voyager, some of which were previously uncharted and still remain unidentified, however many have revealed notable stories that form an important part of Ireland’s maritime history. 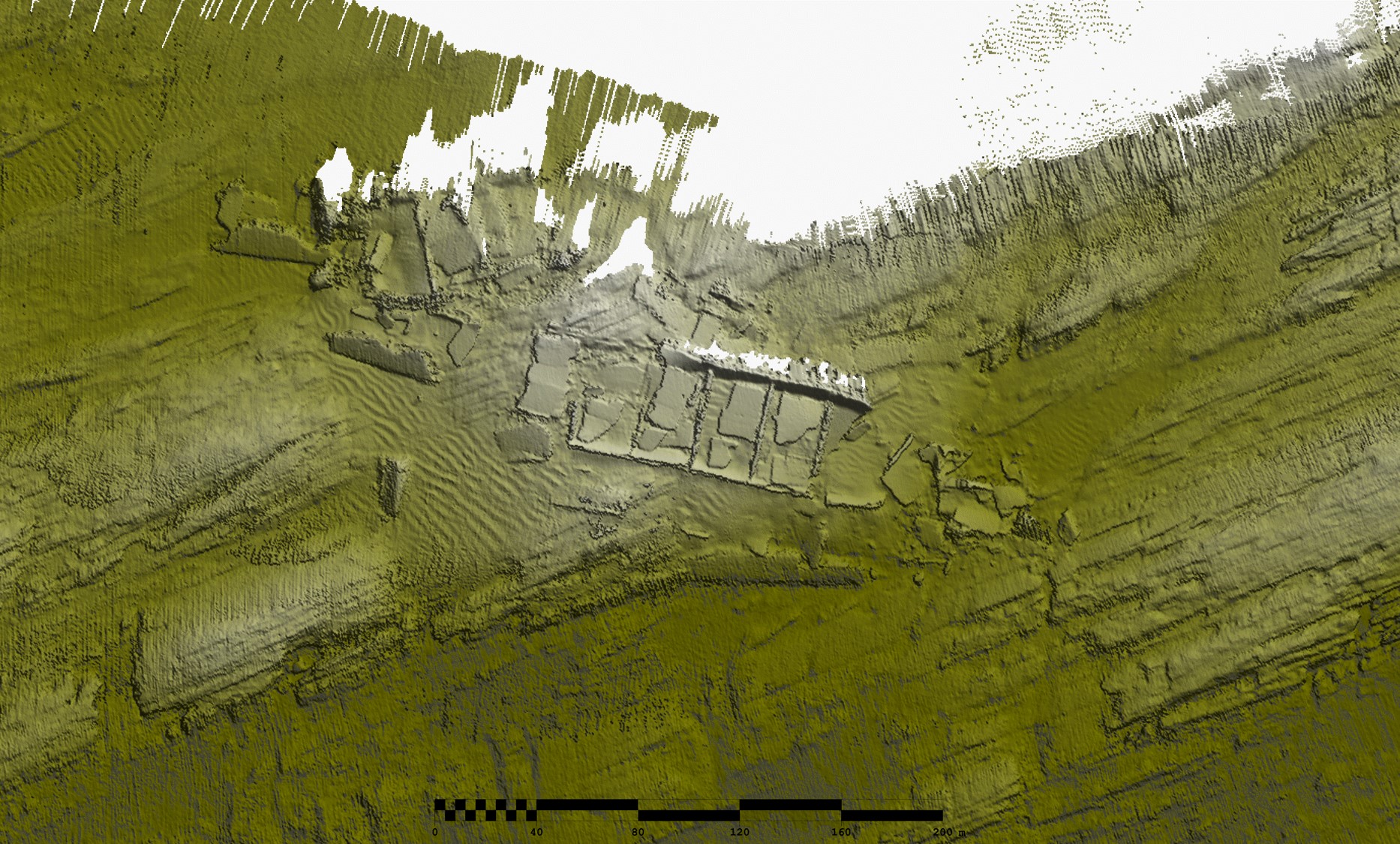 The MV Kowloon Bridge ran aground during a severe storm off the coast of southwest Cork on November 22, 1986. At 294m, it is one of the world’s largest shipwrecks by tonnage. The story of its 24 crew abandoning the vessel at sea after it lost its steering is still well remembered in Ireland today. It released 2,000 tonnes of fuel oil and caused significant damage to local beaches, fisheries and wildlife. It was first surveyed by INFOMAR in 2013. The remains of the badly broken wreck can be seen lying across the Stags rock outcrop with a distinct debris field also visible surrounding the wreck.

The SS Manchester Merchant was en route from New Orleans to Manchester with a cargo of 13,000 bales of cotton for the Lancashire mills when a fire broke out on the 12th January 1903 as the vessel neared the SW Irish coast. Most of the crew took to the lifeboats leaving the master and a handful of crew to scuttle ship in the shallow water of Dingle Bay without any loss of life. Surveyed in 2009 the wreck is orientated NE-SW, bow to NE. The wreck lies largely intact with little or no debris.

The SS W.M. Barkley was torpedoed in the Irish Sea in 1917 by a German submarine. 4 lives were lost including the Master. The vessel was owned by Guinness and on route from Dublin to Liverpool carrying a cargo of stout. A replica is on view in the Guinness storehouse today. The wreck is largely intact and lies in 56m.

Repeat surveys of these wrecks revealed the impacts of storm damage over a period of 10 or more years. The data acquired by the Voyager, in collaboration with the Underwater Archaeological Unit and Ulster University forms a vital baseline for INFOMAR’s time series shipwreck database. Ultimately, this will lead to a greater understanding of the impacts, positive or negative, of climate change on the shipwreck resource in Irish waters, and inform management strategies to address protection needs at important wreck sites into the future.

R.V. Celtic Voyager will be remembered fondly by multiple generations of marine scientists in Ireland as the first research vessel many sailed on as students. As a training platform utilised by multiple colleges, the Voyager provided essential seagoing experience to early career marine scientists. While much of this training comprised day-trips, many approaches to marine exploration and research were demonstrated, including trawling techniques, multibeam survey, sediment sampling, benthic identification, marine mammal observation and survey planning. It was the platform of choice for the Strategic Marine Alliance for Research and Training (SMART), an education and training partnership programme setup to develop national 3rd level capacity in offshore marine-related science and technologies.

The data collected by INFOMAR on the R.V. Celtic Voyager benefits all mariners by ensuring safe navigation around the coast, contributing to the blue economy, supporting the development of renewable energy and enabling sustainable environmental practices - all in support of Irelands marine spatial plan. INFOMAR are honoured to be part of her last voyage and would like to take this opportunity to thank all who sailed on the Voyager, her captains and her crew, and the vessel support team in P&O Maritime and the Research Vessel Operations teams.

Tommy Furey - INFOMAR Joint-Programme Manager
As an Earth Science student in NUIG in the 90’s, despite my best efforts I was not able to secure a marine geoscience voluntary work experience slot on the Lough Beltra, still operational at that time. The state simply didn’t have the capacity to provide the training opportunity. It is with great pride that I now look on however, having been 6 weeks aboard that first R.V. Celtic Voyager mapping survey in 2002 in Donegal Bay, and see the education opportunities and science impact the ship and her crew have provided to Ireland, and it’s new generation of ocean exploration experts. She has helped to build the foundation of Ireland’s future ocean economy, and created some very fond memories and friendships along the way.

Dr. Mark Coughlan - iCRAG Research Fellow
The Voyager, and all the work I and INFOMAR have done on it, has not only helped my research but made it possible. The Voyager has been a reliable constant throughout my research career, allowing my colleagues and I to explore the Irish marine environment, develop skills and collect world-class data. More than that, on surveys, the Voyager is like a second home, and a place where I've made lifelong friends and have many happy memories of good times. I wouldn't be the researcher, or person, I am today without it and its people.