The MeshAtlantic Project provided harmonised seabed habitat maps of the coastal and shelf areas of the Northeast Atlantic to enable development of sustainable management plans at both regional and European levels.
The Marine Institute teamed up with ten partners from institutions in other Atlantic Area countries (France, Portugal and Spain) to contribute to and deliver on all key areas of the project. The three-year project is divided into four operational work activities: 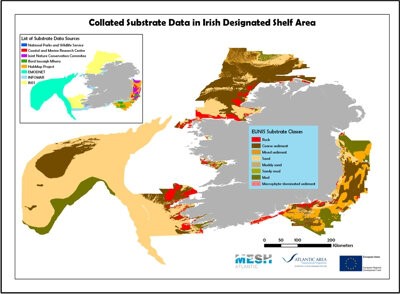 The project utilised existing spatial data from national repositories. Collation of the various datasets into standardised formats and the generation habitat maps add value to a relatively limited and dispersed set of data resources. Information on the broadscale distribution of EUNIS habitats improves the quality of maritime spatial plans for the growing, sea-based economy in the Atlantic Area.