The development of marine renewable energy test sites is an integral component of Ireland's Ocean Energy Strategy. Three national test sites; Westwave, Co. Clare; SmartBay in Galway Bay and the Atlantic Marine Energy Test Site (AMETS), Co Mayo are being developed in accordance with the national Offshore Renewable Energy Development Plan (2015) and supported by INFOMAR bathymetric surveys and associated geophysical datasets. The test sites are necessary to meet the needs of device developers at different stages in their development in line with the testing protocols developed by the Sustainable Energy Authority of Ireland (SEAI).  The respective test sites were developed using different applications of INFOMAR datasets highlighting the fundamental role accurate marine charts occupy in renewable energy research in Ireland.

The AMETS is a wave energy test site for full scale individual devices developed by SEAI near Belmullet in County Mayo. The site provides for the deployment of full scale offshore wave energy devices to test their performance and endurance in open ocean conditions. Potential sites in Broadhaven Bay were identified and seabed surveys of the area undertaken in 2008, 2011, 2014 and 2016 to provide information on water depth, seabed topography, composition and depth/location of bedrock. The assessment identified the optimal test areas and confirmed the presence of a sand/sediment-based seabed between 50 – 100 m, ideal operating depths required for full scale wave energy converters. The INFOMAR programme also undertook a detailed analysis of sediment type to determine the suitability for devices constrained by the need for anchoring in deep sediment. Furthermore, seabed datasets are essential in determining sedimentology in the survey area and establishing a feasible cable route linking the test-site with the shore. Securing anchor cables may penetrate the seabed up to 3-8 m, while submarine power cables will be buried at least 1.5m below seabed.  Arising from the above surveys a number of suitable anchor sites have been identified with a vertical sediment thickness > 5m.

Map of AMETS showing Test Berths A and B Belmullet Co. Mayo

The Electricity Supply Board (ESB) is developing WestWave, off Killard, Co. Clare, to harness wave-energy from the North Atlantic. It is a 5 MegaWatt  pre-commercial project to build the first full-scale, operational wave farm off the west coast of Ireland. The proposed development will include near-shore and offshore wave energy converter devices. A series of INFOMAR ground investigations were designed to acquire sufficient data to confirm the alignment, design depth, and construction methodology for the proposed moorings and submarine cables installation. The tests included vibrocore seabed sediment samples (of length 3.0m), Cone Penetrometer Tests at selected points along the proposed route and laboratory testing to determine engineering properties of the sediment. The datasets enabled accurate assessment of ground conditions. 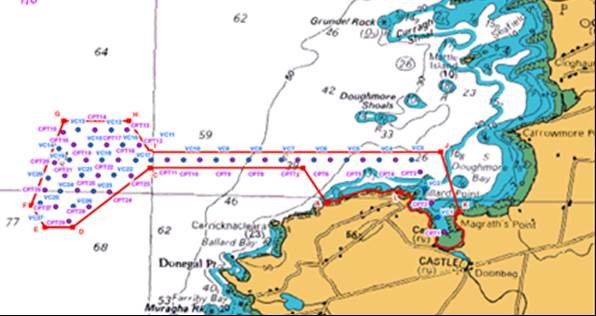 The Galway Bay Marine and Renewable Energy Test Site, situated 1.5km offshore from Spiddal in Connemara, and has been operated by the Marine Institute since 2006. The site provides for the deployment of quarter to half-scale offshore wave energy devices to test their performance in relatively benign ocean conditions.  INFOMAR data is central to development of the site including providing data for the identification of mooring locations and anchoring blocks for wave energy devices and the successful and safe removal of equipment upon test completion. This ensures minimum impact to the natural ecosystem.

High resolution seabed data is used extensively as a key information source in the construction and development of all three national marine renewable energy test sites off the west coast of Ireland. The test sites are at differing levels of maturity and vary in the functionality and services they provide to renewable energy developers. INFOMAR datasets have been, and continue to be, central to the strategic development plans and decision making for users of the test sites. 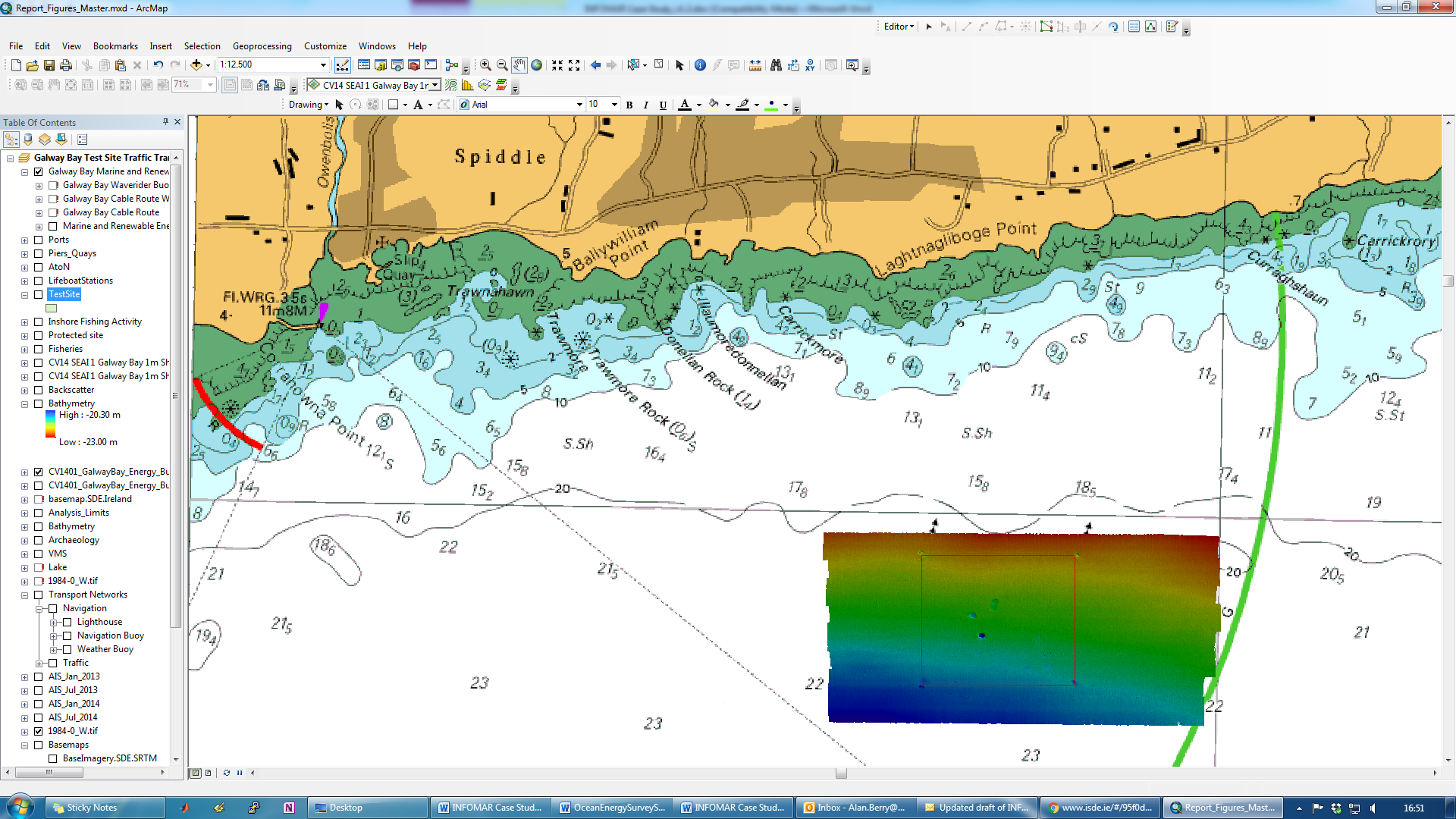