The Augmented Reality (AR) Sandbox was launched at INFOMAR's Annual Seminar 2015. An INFOMAR initiative, this ‘AR Sandpit’ is the first of its kind in Ireland.

The AR sandbox was first developed as part of a National Science Foundation (NSF) funded project lead by visualisation collaboration, KeckCAVES, at the University of California. The AR sandbox is a scientific educational tool which can help users to explore the importance of topography, contouring, geology and hydrography.

The AR sandbox consists of a computer running simulation and visualisation software, a Kinect 3D camera which detects depth data and a projector which essentially projects the topography to match the real sand topography.

Check out the video below to see the AR Sandbox in action! 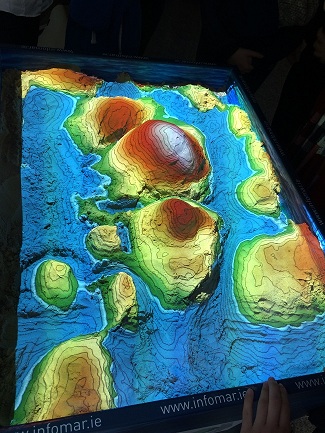